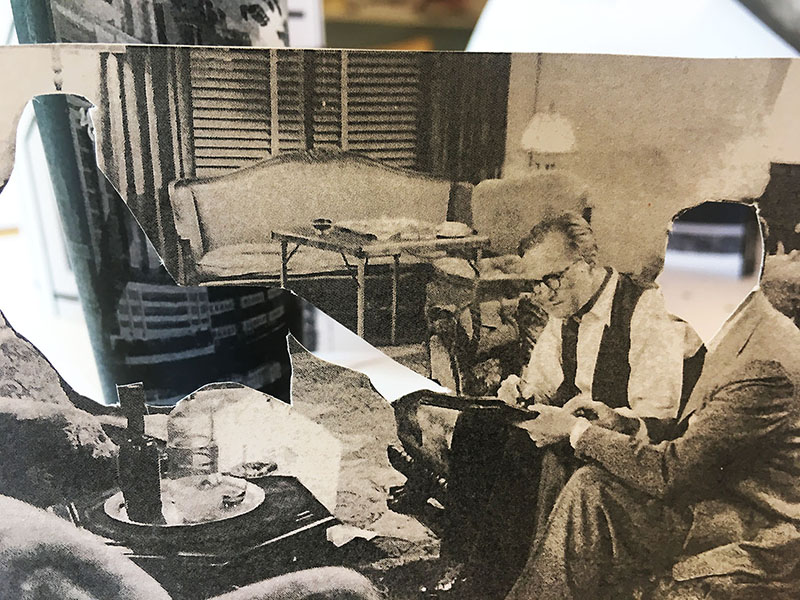 Congested breathing sounds like words; or music, minute things become enormous, noise clashes with noisy silence. It’s always hot; humid. Where is this? When is this? Maybe it’s a Graham Greene audiobook. ‘Our man in Havana.’ Now someone’s planting rice, calf deep in water and mud, bent over. All before the day’s too hot.

A hollow space for the engines, sounds omitted muted by a thick fabric, moist, torn at the edge. Staff pulling levers in seemingly arbitrary pattern, some with lab coats on. The engines drive furious components of a machinery – cogs, wheels – centred around a pool into which a fluid of relatively high viscosity flows from large metal pipes. When the whistle blows, they leave the engine room for the corridor; white with fluorescent light, this is where their lunch rooms are located.

Moisture. They are spat out, desert surroundings. Some shooting going on. The silence. Wires sing to each other, touch each other sometimes. Uiiiiiiiiiiiiii, says the little baby train, the little train, the little train with the little bells, and a speedy train, not a choo choo train, not at all, no choo choo, but the wind catching, things, caught in the wind, near the train tracks, the wind, she discover the thing, entangled in a mesh, the thing, caught by the wind, some kind of polymer, attach it to the mesh, the mesh to the stick. There by the rails, it will be taken, she thought, unless she takes it, but what for? What is the artefact’s purpose? Clearly it had one, clearly it was constructed for a purpose, with a function, but what purpose, what function? Like a dream catcher. Maybe the dream is a bad dream? Maybe the dream is stuck? Is caught the same as stuck? It’s becoming unstuck now, I can hear it. But it sounds like an old dream. This is not my dream. It’s too grand. Whose dream is it then? Fuck that dream. I go and eat something. Who is watching the telly? Is there someone in the house? Oh, my it’s a bunch of people in here.Is it mates of Kelly or Jack? How did they get in? Are the windows opened? They have definitely broken the window. Is this the dream again or is it reality?They seem to have been disappeared. Should I go out and check?

2ndDay: Re-enact the whole Overlook Hotel experience. It takes a while before getting in tune with a Kubrick maze.

3rdDay: Should I go out and check?

Last Day: Dance, fly, run or walk. Get back home to your heart or leave it. Flies are all over. Drinking.

Sleep is gone or come back. My dream is forgotten. White silence. Things falling down the stairs, the sound echoing up the stairwell. SHIT!!! Spanish brandy; Carlos III & Fortuna’s. Someone’s kicking a pigskin ball. And the sounds of the tram again. What’s that story again? The one where someone gets run over by the tram, and the head rolls at his feet? Tired of the sounds of the washing machine. Who is reading the twittering American anyway? Now shift the sounds. As we put the background noise in the foreground everything changes. How could we miss the underwater tea kettles – boiling in slow motion like a steamboat from Disney? Now shift again. Sitting on the veranda and watching my friends become bacon. Bagpipes, full throttle. Shift again. Approach the “blubb blubb.” They say take-off? I must be close now. The handmaiden repeats the word “happy” as if to convince herself this is her true disposition. In the background, the clicker is still at it – measuring the time for the exercise. It has its own calendar, this space, with all its features, time is measured differently here, no weeks, no minutes, no years – no consideration is taken to moons or suns, only to passing intensities, in the dark space – no consideration is taking to the time of the bodies that populate it. It is a different sense of time altogether – the time of minerals, of rock, of the inner materials of the globe. This is what dictates the passing of time here. Bodies placed in the constellations occupy the space, plugged into one another in networks, an endless expanse towards a horizon clad in rubbery darkness, then they fade out and into an open silence it goes, into the silence, and the horizon’s dark expanse.

There was that man who collected stuffed small mammals and dressed them in clothes in small domestic scenes, some were really disturbing. A dying Scottish pig. Now there’s a swarm coming. I can’t see it, but the wind is carrying the sound; the bamboo chimes clattering; dust in the air. Other people further away must know what it is all about; it’s passed them; maybe it passed over them. It’s not coming from anywhere, that’s what’s troubling. The noise pollution is like a thin suffocating veil. Enter the clowns, with their staccato speech, their piano playing, interspersed with burst of insufferable noise. Better go under-water, better living under-water. Up here the clowns keep laughing at us. Better living under-water, for hybrid bodies like ours, under-water is our environment, an environment proper to our bodies. At surface level the clowns keep laughing at us, under-water it sounds more like music than noise. Amphibians are making things sticky again. Ho, ho. Always hiding behind the funny-funny. But actually, I don’t find this amusing at all, thank you. I could join a different film, I suppose. What about a romantic comedy? People are happy, they get a bit worried and have to struggle just a bit and then everything turns out for the best.Violins are playing. But why untuned? This doesn’t work either. I leave the building.It’s blowing outside. Grey, kind of empty. Isn’t that unusual? I go in and grab a coffee at the coffee shop on the corner.No one here either?

“Coffee, please. Hello! Anyone there?”

They’re washing the streets after the market, slopping out in the heat, the smell thick and ripe mixed with diesel now, mixing into the air. The ships bell says it’s time to push off; there’s clearer air out there to be had. This is reality now. Everyday life has changed.. In my early years, I could have run for a beauty contest, but no use now. My legs are strong though. Need food in a few hours. Where would be the best place to hide out for a couple of hours while eating? I can hear the train from afar. OK, I try to jump on it. Here it is. One chance now. Don’t blow it. It passes. Fuck. Through the window I can see the posh people eat and laugh. Fuck them. The revolution is coming. Where is the revolution? In your ears, your tears. Upside down you and I. In the interlude. Ha, ha! I heard the laughing too, and now the enclosure of a balloon. It is white and milky and softly stretchy. Lactaoid. Wheing, whoing. Little moon bunnies, nice to describe an alien like that, and after all we made it too. The rubbings could really injure somebody’s ears if they’re not careful. And we don’t want that, do we? No, of course not, I’m sorry. It might be they really are all dead now. Or are they sleeping? But they usually giggle when sleep. That does tell a moon bunny apart.

The Rice Planter, The Machine, The Not-A-Choo-Choo Train, The Wind-Catching-Wind Device (aka The Thing, The Artefact), The Overlook Hotel Experience, The Underwater Tea Kettle, The Clicker, The Mammal Collector, The Hybrid-Bodied Underwater Dweller, The Little Moon Bunnies, The Our Man in Havana, The Donald Trump, The Women of the World, The Steely Dan, The Digital Dream Catcher, The Twittering American, The Handmaiden, The Dying Scottish Pig 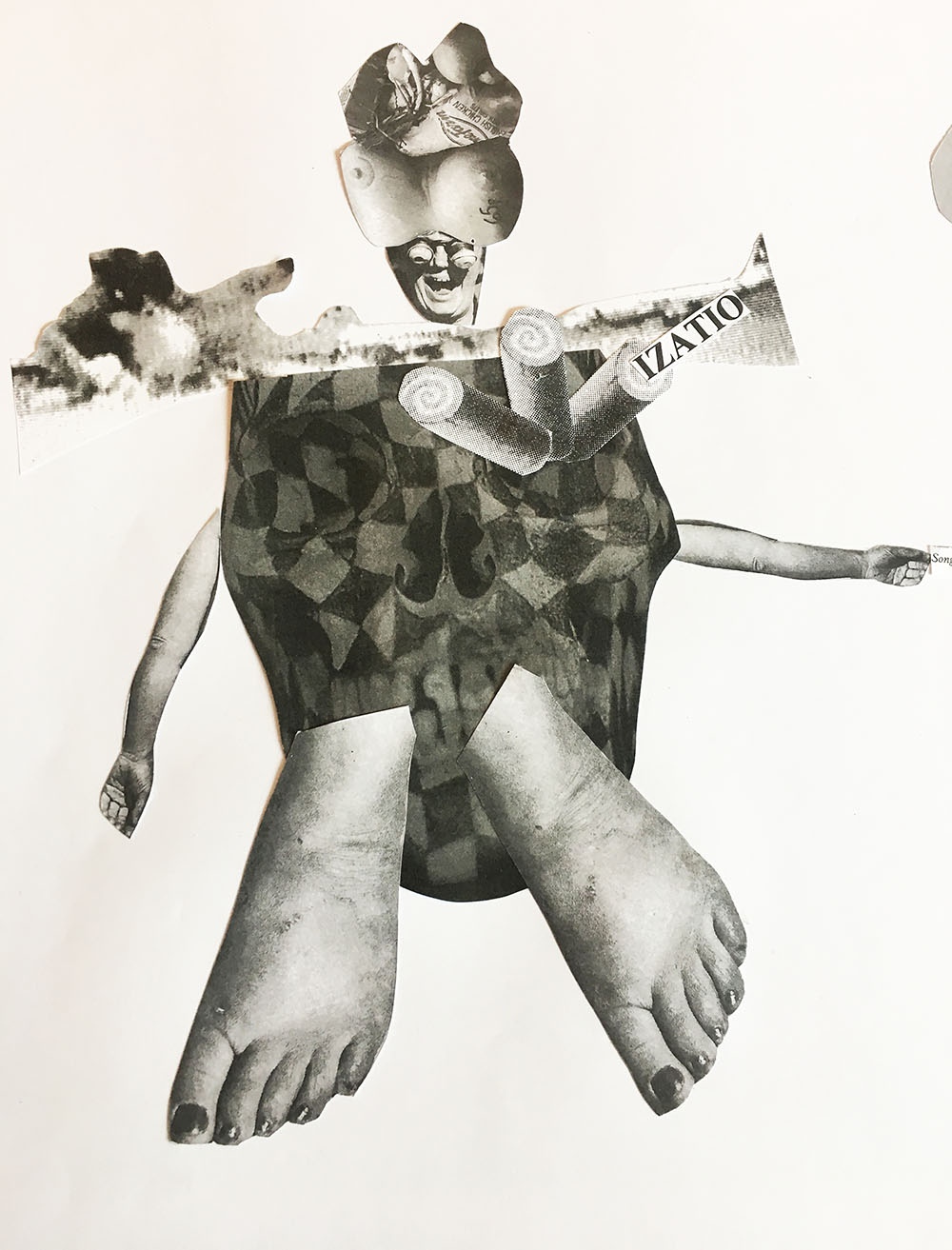